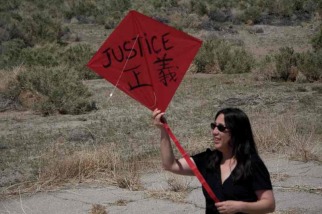 Freedom & Justice Performance at Manzanar, April 24, 2010
The idea for a performance called Freedom and Justice came after reading the book Artifacts of Loss, by Jane E. Dusselier.  In the book, she writes of the adult Japanese internees who would make toys for the kids in camp since they could only take very few, if any. When they left, they could only take what they could carry and that was usually necessities. At the time, the adult internees were trying to salvage some semblance of normalcy for the sake of the children in an environment of sudden incarceration and abnormality in the children's lives. They would make toys such as paper airplanes, dolls and kites. Artist Estelle Ishigo  made a beautiful watercolor called Boys With Kite depicting two small boys who have their kites caught in the barbed wire fence of the camp.
I decided to fly the kites at the 41st Annual Manzanar Pilgrimage, April 24, 2010. My idea was to get two kites and write the words freedom on one and justice on the other and fly them in honor of the internees. It seemed symbolic to flying it free as well as being referential to Ishigo’s painting. After reading the passage in the book about internees making toys, I then thought it would be wonderful to fly kites there now, under conditions of freedom...and to honor the internees at the site of incarceration.

All photographs are by Daniel Lulu 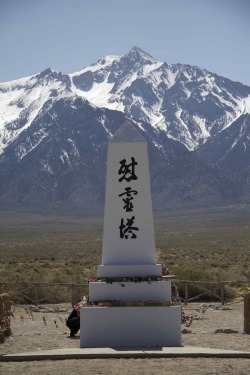 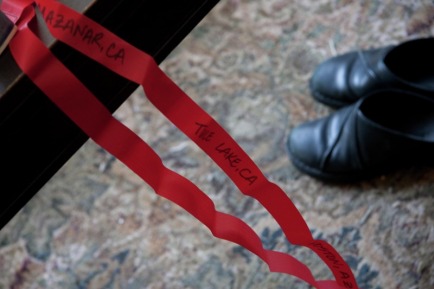 Notes: On the tail of the kites I wrote the Japanese words oyakoko (traditional familial obligations), gaman (enduring what seems unbearable with dignity and grace) and okage sama de (we are who we are because of those who came before us) to honor my ancestors. I also wrote the names of all ten of the relocation centers, the four Department of Justice camps and the two citizen isolation camps. These camps incarcerated approximately 120,000 men, women and children of Japanese descent. My hope is that this travesty of justice will not happen to any group ever again based on their ethnic origins, sexual orientations, religious beliefs or otherwise.  I wish to thank Sandra Sotiriadis for helping me fly the kites at Manzanar and my son Daniel Lulu for documenting the event. It was a wonderful experience to do this with family. Densho.